A Photograph Is Not an Opinion. Or Is It?

Undertake to do a book of photographs of people with nothing more in common than that they are women (and living in America at the end of the twentieth century), all–well, almost all–fully clothed, therefore not the other kind of all-women picture book.

Start with no more than a commanding notion of the sheer interestingness of the subject, especially in view of the unprecedented changes in the consciousness of many women in these last decades, and a resolve to stay open to whim and opportunity.

Sample, explore, revisit, choose, arrange, without claiming to have brought to the page a representative miscellany.

Even so, a large number of pictures of what is, nominally, a single subject will inevitably be felt to be representative in some sense. How much more so with this subject, with this book, an anthology of destinies and disabilities and new possibilities; a book that invites the sympathetic responses we bring to the depiction of a minority (for that is what women are, by every criterion except the numerical), featuring many portraits of those who are a credit to their sex. Such a book has to feel instructive, even if it tells us what we think we already know about the overcoming of perennial impediments and prejudices and cultural handicaps, the conquest of new zones of achievement. Of course, such a book would be misleading if it did not touch on the bad news as well: the continuing authority of demeaning stereotypes, the continuing violence (domestic assault is the leading cause of injuries to American women). Any large-scale picturing of women belongs to the ongoing story of how women are presented, and how they are invited to think of themselves. A book of photographs of women must, whether it intends to or not, raise the question of women –there is no equivalent „question of men.” Men, unlike women, are not a work in progress.

END_OF_DOCUMENT_TOKEN_TO_BE_REPLACED 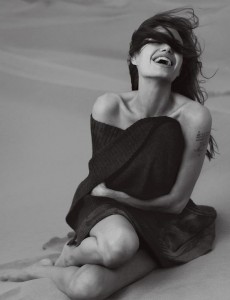 Anna-Lou „Annie” Leibovitz (born October 2, 1949) is an American portrait photographer. Born in Waterbury, Connecticut, Leibovitz is the third of six children. She is a third-generation American whose great-grandparents were Jewish immigrants, from Central and Eastern Europe. Her father’s parents had emigrated from Romania. Her mother, Marilyn Leibovitz, was a modern dance instructor of Estonian Jewish heritage; her father, Sam Leibovitz, was a lieutenant colonel in the U.S. Air Force. The family moved frequently with her father’s duty assignments, and she took her first pictures when he was stationed in the Philippines during the Vietnam War.